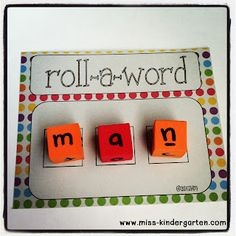 My daughter (5 years old) recently brought home a set of special dice she had made at school. There were three dice, two with six different consonants on them and one with six vowels on it ( the ‘a’ was repeated). The idea is you roll the dice and then sound out the word.

This gave me the idea for a soldering kit. It has three dot matrix displays and a button. You press the button and the kit generates a random three letter word. It’s just like the CVC (consonant, vowel, consonant) dice game except it’s electronic. It would have the advantage of not being limited to 6 consonants. It would operate in two modes, one where the letters are completely random (so you might get ‘nonsense’ words, which are still good practice for sounding out the words), the other mode would restrict the results to real words.

We will start working on the design and may even run a crowdfunding campaign to finance it. Add a comment below if you think this kit is a good idea.

Tell us what you think